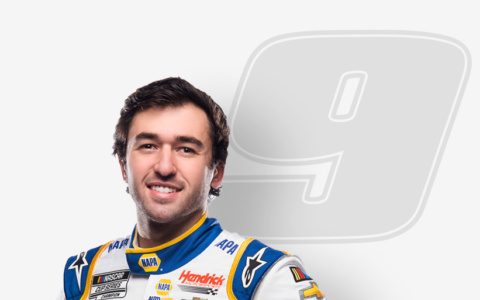 Chase Elliott, 2020 NASCAR Cup Series champion and now five-time most popular driver, embarks on his eighth full-time season at stock car racing’s top level with a mission of securing a second title. The 27-year-old will once again pilot the famed No. 9 Chevrolet Camaro ZL1 led by veteran crew chief Alan Gustafson. Together they’ve driven to 18 points-paying victories over seven seasons, including a series-leading five victories in 2022.

Now a bona fide NASCAR star, Elliott was voted by fans as ESPN The Magazine’s "NEXT" racer, appeared as a guest on MTV’s "Ridiculousness," voiced characters in Disney Pixar’s "Cars 3" and Nickelodeon’s "Blaze and the Monster Machines," and has been featured by Sports Illustrated, The New York Times, Los Angeles Times, Forbes and GQ among others.

In March 2017, Elliott launched the non-profit Chase Elliott Foundation, which is dedicated to providing support and financial assistance to well-qualified charitable organizations with an emphasis on helping others live healthier, happier lives. The foundation has worked closely with Children’s Healthcare of Atlanta on initiatives to benefit its summer camp program.

Elliott has followed in the footsteps of his father, NASCAR Hall of Famer and 1988 NASCAR Cup Series champion Bill Elliott, in possessing a natural ability behind the wheel, a tireless work ethic and a strong connection with his fans. Bill and Chase are the fifth father-son duo to win NASCAR national series championships – an exclusive list that includes NASCAR’s most iconic names: Petty, Earnhardt, Jarrett and Pearson.

Chase Elliott’s first job was washing dishes. Born and raised in Dawsonville, Georgia, a town steeped in racing history, he worked in the kitchen of the Dawsonville Pool Room at 13 years old. In the 1980s, owner Gordon Pirkle began sounding a siren in celebration of each Bill Elliott victory. That tradition continues today with Chase.

Elliott began racing go-karts at 8 years old with dreams of competing at NASCAR’s highest level. From 2003 to 2011, he gained experience competing in various series, winning more than 60 races by age 15. In February 2011, his efforts paid off when he received a phone call from NASCAR Hall of Fame car owner Rick Hendrick, who offered the high school freshman a contract with his championship-winning organization, Hendrick Motorsports.

What followed was a rapid rise through super late models and other national touring divisions in preparation for NASCAR. Elliott is a two-time (2013 and 2014) Georgia Racing Hall of Fame Driver of the Year, an annual award voted on by motor sports journalists. In 2013, he became the first driver in history to win all four majors on the super late model circuit: the All-American 400, Winchester 400, World-Crown 300, and Snowball Derby.

At 18, while spending a portion of the year finishing high school, Elliott became the youngest champion in any NASCAR national touring series when he won the 2014 Xfinity Series title driving for Hendrick Motorsports affiliate JR Motorsports. His storybook season included three wins, two pole positions and 26 top-10 finishes in 33 races. Elliott’s first victory came at Texas Motor Speedway in only his sixth career start, making him the second-youngest winner in series history.

Prior to his entrance into the Xfinity Series, Elliott broke records driving select NASCAR CRAFTSMAN Truck Series races in 2013, becoming, at the time, the youngest winner in series history in only his sixth start. He transitioned to the Truck Series after a strong season of firsts in the ARCA Menards Series East. In 2012, he captured his first career NASCAR touring series victory on May 19 when he took the checkered flag in the ARCA Menards Series combination event at Iowa Speedway. Elliott followed that performance by becoming the series’ youngest pole winner when he took the top qualifying spot at Langley Speedway. At the conclusion of the 14-race season, he was chosen by fans as the ARCA Menards Series East’s most popular driver.

In January 2015, it was announced Elliott would join the NASCAR Cup Series in 2016. In preparation, he drove five points-paying Cup races for Hendrick Motorsports in 2015 while competing in a second full season for JR Motorsports. Elliott led the Xfinity Series in top-10 finishes en route to a second-place result in the championship standings and won his second consecutive most popular driver award. Elliott started his full-time Cup Series career with a bang in 2016 by becoming the youngest DAYTONA 500 pole winner of all time at 20 years, 2 months and 17 days. The Elliotts became the fourth father-son duo to win the DAYTONA 500 pole position, following the Petty, Allison and Earnhardt combinations.

Paired with crew chief Gustafson, Elliott went on to have the best rookie season in more than a decade, earning 10 top-five finishes – the most by a rookie since 2005 – along with 17 top-10s and two poles on his way to being named the 2016 Cup Series rookie of the year. Driving the iconic No. 24 Chevrolet, he secured a spot in the playoffs and became the only rookie ever to advance to the Round of 12.

In 2017, Elliott started his sophomore season by earning the DAYTONA 500 pole for the second consecutive year. The then 23-year-old driver collected five second-place finishes (Michigan International Speedway, Chicagoland Speedway, Dover Motor Speedway, Charlotte Motor Speedway and Phoenix Raceway) and clinched another spot in the Cup Series playoffs where he advanced to the Round of 8. Elliott amassed a career-high 12 top-five finishes and 21 top-10s, ultimately finishing fifth in the standings. In June 2017, Hendrick Motorsports and Elliott inked a four-year contract extension through 2022 and two months later announced that beginning in 2018 he would drive the storied No. 9 – a number synonymous with his legendary racing family.

2018 was a breakout season for the driver of the No. 9 Chevrolet as Elliott collected 11 top-five finishes and 21 top-10s, including three runner-up results that brought his career total to eight. The biggest moment came with his highly-anticipated first career Cup Series victory at Watkins Glen International. He continued his winning ways by collecting two more wins – at Dover and Kansas, both during the 10-race NASCAR playoffs. Elliott finished the season sixth in the standings and was voted by fans as the NASCAR Cup Series most popular driver for the first time.

In 2019, Elliott built on the momentum from the previous season. The driver of the No. 9 earned his first win in April at Talladega Superspeedway – his first career Cup Series superspeedway victory. He also proved his road course prowess with his second consecutive Watkins Glen victory and a dramatic win at the Charlotte Motor Speedway ROVAL where he recovered from a dramatic late-race incident to take home the checkered flag. Elliott wrapped up the year with 11 top-five finishes, 15 top-10s and career-highs in pole awards (four) and laps led (601). He closed out the season 10th in the standings and was honored as most popular driver for the second consecutive year.

2020 proved to be one for the record books as Elliott and the No. 9 team navigated the season with poise and determination. As the series approached the playoffs, Elliott began gaining momentum that he ultimately carried throughout the final 10 weeks of the season. Following a Round of 12 victory at the Charlotte Motor Speedway ROVAL, Elliott secured his place in the Championship 4 with a dominating win in the season’s penultimate race at Martinsville Speedway. The Georgia native outdueled three of the best drivers in stock-car racing in the season finale at Phoenix to earn his first NASCAR Cup Series championship, becoming the third-youngest driver in history to accomplish the feat. Elliott closed out his championship-winning season with career highs in wins (five), top-five finishes (15), top-10s (22) and laps led (1,247). He also picked up a $1 million bonus with a thrilling victory in the NASCAR All-Star Race at Bristol Motor Speedway and was once again named most popular driver.

The 2021 season nearly ended with back-to-back championships for Elliott and the No. 9 team. The driver’s victories at Circuit of The Americas and Road America solidified his spot in the playoffs for the sixth consecutive season. After a solid performance in the playoffs landed the team in the Championship 4 for the second year in a row, Elliott ultimately finished fourth in the standings following a fifth-place run in the season finale at Phoenix. The driver of the No. 9 Chevrolet ended the year with two wins, 15 top-five finishes and 21 top-10s, with nearly 1,000 laps led. It was his fourth straight season earning multiple victories, and his average finish of 11.4 was a career-best in the Cup Series. Capping off a successful 2021, Elliott earned most popular driver honors for the fourth consecutive season.

In 2022, Elliott and his No. 9 team set the pace in the new Next Gen car with a series-high five victories – Dover, Nashville Superspeedway, Atlanta Motor Speedway, Pocono Raceway and Talladega. Prior to the start of the season, he signed a five-year extension with the team. The Hendrick Motorsports driver also earned his first Cup Series regular-season championship, which helped catapult him to the top seed to start the 10-race playoffs. Elliott advanced to the Championship 4 for the third consecutive year, ultimately placing fourth in the season standings after an incident in the final stage took him out of title contention. Accompanying Elliott’s five wins were 12 top-five finishes, 20 top-10s and 857 laps led. He led the series with an average finish of 12.5 and the Georgia native also brought home his fifth most popular driver award at the season-ending banquet in Nashville, Tennessee.

Elliott resides in his hometown of Dawsonville and in his downtime enjoys spending time on the lake, wake surfing, mountain biking, gaming, country music and pulling for the Atlanta Braves and Georgia Bulldogs. He is a multi-engine instrument rated private pilot.