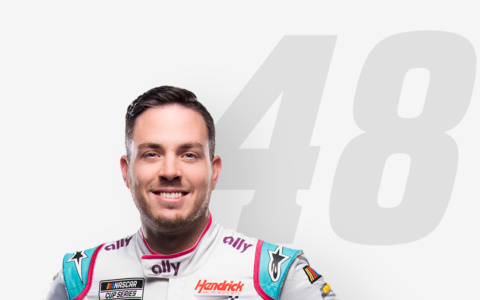 Following his fifth straight playoff appearance and fourth consecutive season with a win, Alex Bowman is looking to continue to make his mark at Hendrick Motorsports. The 2023 NASCAR Cup Series season will see him paired with a new crew chief in Blake Harris, who takes over following Greg Ives' retirement after the 2022 season. The pair have their focus on one thing: Winning races in their first season together. Bowman's total of five wins since 2021 is tied for third-most in the series entering the season.

The 2022 season marked the second year Bowman drove the No. 48 Ally Chevrolet Camaro ZL1 for 14-time Cup Series champions Hendrick Motorsports. Bowman made his transition from the No. 88 at the end of the 2020 season when seven-time champion Jimmie Johnson retired from Hendrick Motorsports and gave primary partner Ally their first win in the NASCAR Cup Series at Richmond Raceway in April 2021.

Bowman captured one victory (Las Vegas Motor Speedway), four top-five finishes and 12 top-10s in the debut season of the Next Gen race car. He kicked off the 2022 Cup Series season by taking the outside pole position – next to teammate Kyle Larson – for the DAYTONA 500, his fifth consecutive year he started on the front row of that race. Just two races later, the No. 48 driver found himself in victory lane in Las Vegas where he won the first stage and led 16 laps at the 1.5-mile venue, punching his ticket to the 2022 playoffs. Bowman made it to the Round of 16 but had his run for the championship sidelined after sustaining a concussion on Sept. 25 at Texas Motor Speedway. He returned to race in the season finale at Phoenix Raceway where crew chief Greg Ives called his last race atop the pit box as a full-time crew chief in the Cup Series. Bowman finished 16th in the final season standings.

In 2021, Bowman garnered four wins (Richmond, Dover Motor Speedway, Pocono Raceway, and Martinsville Speedway), eight top-five finishes and 16 top-10s – all career-best totals. This marked his first season in the No. 48, which he transitioned to from the No. 88 following seven-time champion Jimmie Johnson's retirement from full-time racing. He and his team started the season by winning the pole position for the DAYTONA 500, marking his second pole position for the season-opening event. He found his stride early when he took home his first win in the ninth points-paying race of the season at Richmond, punching his ticket to the playoffs once again. The victory at Richmond gave primary partner Ally their first win in the Cup Series in April 2021. He continued to show his grit, winning at Dover and leading Hendrick Motorsports to the first 1-2-3-4 finish in the organization’s history. Bowman’s playoff road ended in the Round of 12 at the Charlotte Motor Speedway ROVAL elimination race in October, and he finished the season ranked 14th in the final Cup Series standings.

Bowman had a solid year in 2020, capturing one win (Auto Club Speedway), six top-five finishes and 15 top-10s. The team started off the season by capturing the outside pole position for the 62nd running of the DAYTONA 500. The Tucson, Arizona, native led 440 laps in 2020, more than his previous total in any single season. Bowman and the No. 88 team secured a spot in the Cup Series playoffs following their dominating March win at Auto Club where they led 110 of 200 laps. The team advanced to the Round of 8 for the first time in Bowman’s six-year Cup Series career. At the conclusion of the 36-race season, Bowman finished a career-best sixth in the playoffs.

The Tucson, Arizona native, opened 2019 by capturing the outside pole position for NASCAR’s crown jewel, the 61st running of the DAYTONA 500. He went on to capture seven top-five finishes, 12 top-10s and his first career Cup Series victory at Chicagoland Speedway in June. The driver led at six different tracks for a total of 200 laps and earned a Cup playoff berth for the second straight season. Led by Ives, the No. 88 team advanced to the Round of 12 following Bowman’s second-place finish at the Charlotte ROVAL. They finished 2019 ranked 12th in the final standings.

In 2018, Bowman continued to hone his race craft in his first full-time season with Hendrick Motorsports in the No. 88 Chevrolet. The then 25-year-old driver garnered three top-five finishes, 11 top-10s, and a pole position at the DAYTONA 500. Bowman also notched a win in the first Open qualifying event for the NASCAR All-Star Race at Charlotte.

Bowman drove just three races in 2017, consisting of two starts in NASCAR Xfinity Series and one in NASCAR CRAFTSMAN Truck Series, and he made them all count, racking up three top-10 finishes that included a major milestone. After a seven-month layoff from competitive racing, he returned in the October Xfinity Series event at the Charlotte Motor Speedway oval to lead 32 laps and record his first career NASCAR national series victory. In addition to his handful of races in 2017, Bowman served as an integral part of the simulation and on-track testing programs for Hendrick Motorsports and manufacturer Chevrolet as he prepared to join crew chief Ives and the No. 88 team in 2018.

Even without a seat available in its four-car stable, Hendrick Motorsports quietly signed Bowman in October 2016 to keep him in the fold. The situation changed dramatically in April when Dale Earnhardt Jr. announced he would retire at the end of 2017. That July, Hendrick Motorsports made it official: Bowman would join the Ives-led No. 88 Chevrolet team full-time beginning in 2018.

In 2016, Bowman’s talent and raw speed were on full display when he received the unexpected call to race for the injured Earnhardt, NASCAR’s perennial most popular driver, for 10 Cup Series events. Under a bright spotlight, he delivered by earning three top-10 finishes for the No. 88 Hendrick Motorsports team, including a near victory at his home track of Phoenix, where he won the pole and led a race-high 194 laps.

Bowman made the most of nine Xfinity Series starts for JR Motorsports in 2016, recording one pole position, three top-five finishes and seven top-10s in addition to being called upon by Hendrick Motorsports to race in 10 of the season’s final 18 Cup races. He debuted in Earnhardt’s No. 88 Chevrolet at New Hampshire Motor Speedway on July 18 and earned a highest finish of sixth Nov. 13 at Phoenix after starting from the pole.

To continue moving up the ranks, Bowman accepted an offer from BK Racing to drive in the Cup Series, making his debut in the 2014 DAYTONA 500. He went on to start 71 Cup events over the 2014 and 2015 seasons for BK Racing and Tommy Baldwin Racing, which competed each week against larger multi-car teams with deeper resources. Bowman also raced twice in the 2014 Xfinity Series and once in the 2015 Truck Series for Earnhardt’s JR Motorsports team, which is affiliated with Hendrick Motorsports.

At 19, Bowman signed with legendary car owner Roger Penske. In 2012, he posted four ARCA Menards Series wins and led 20 percent of the season’s total laps to earn another rookie of the year title. During the same year, he made his first NASCAR national series start in the Xfinity Series at Chicagoland Speedway.

Bowman’s ability has never been a secret in racing circles. He piled up wins driving West Coast sprint cars before a scary incident at a Las Vegas dirt track put him in intensive care and changed his focus to full-bodied stocks – and ultimately NASCAR. In 2011, he was rookie of the year in the ARCA Menards Series East and racked up two wins in the ARCA Menards Series, winning both races he entered.

Bowman has never turned away from hard work, having learned its value while building his own race cars and pitching in at his father’s Arizona body shop. As an auto enthusiast, he is passionate about working on both his personal cars and race cars. Under his own banner of Alex Bowman Racing, Bowman competed in the Chili Bowl Nationals as a driver and a car owner of three entries in 2023. Today, he resides in Concord, North Carolina, with his two dogs – Roscoe, a rescue Beagle mix, and Finn, a charcoal Labrador retriever.